Finally, I get to see the famous shirt my donations helped Erhan earn. ; ]

Netscape, which started life as a Web browser company and then evolved into a media destination site, is being reinvented once again to merge news reporting and blogs with the latest Internet trends.

On Thursday, the revised Netscape.com will begin a public test of what its new general manager, dot-com news entrepreneur Jason Calacanis, said aims to reinvent the modern news service.

"I don't think journalism is broken at all," Calacanis told Reuters. "But some things can come faster."

Calacanis, 35, made his name as publisher of the Silicon Alley Reporter magazine that documented the New York Internet scene in the second half of the 1990s.

He enjoyed a second act after starting what has become one of the most popular Web journals, gadget blog Engadget.com. He joined AOL after selling his blog company, Weblogs, last year for an estimated $25 million.

Like Calacanis's career, the new Netscape.com marks the rebirth of a first-generation Internet brand. Netscape the brand, like AOL, was synonymous with Web browsing a decade ago.

Netscape, which popularized the World Wide Web with its easy-to-use browser, was bought in 1999 by AOL, now a unit of Time Warner.

After Netscape's browser software was crushed by competition from Microsoft, the brand was reborn first as an Internet portal and again as a discount Internet access provider.

The new Netscape.com will have links to news stories grouped under broad categories such as movies, health and fitness.

Popular stories appear higher on the site, ranked according to a "velocity" formula that determines their popularity. The equation takes into account timeliness, number of votes, comments, clicks and forwards, before weighting stories according to how recent the event occurred.

To keep it fresh, a vote that occurred an hour ago is worth more than a vote that happened yesterday, the company said.

Links to stories found anywhere on the Internet, including those from traditional news organizations, are posted on the site by readers. The editors, which Netscape calls anchors, can choose to highlight what they consider important stories.

Editors will comment on stories or do original reporting, Calacanis said, highlighting a key difference from blogs, which are mostly made up of commentary.

For instance, beneath a link to a professional restaurant review was an account of a conversation its editors had with the restaurant's proprietor.

"We don't have to do a level of journalism that you guys do," he said, referring to traditional news organizations. "You guys take it 90 yards, we take it the next 10."

It fits somewhere among the chaotic democracy of user-generated news sites such as Digg.com, where readers determine which stories appear by voting, the hard logic of Google News, which determines relevance with software, and mainstream sites like CNN.com, Jupiter Research analyst Joe Laszlo said.

"Even the best computer systems don't do a great job picking your news for you," Laszlo said, referring to sites like Google News. The new Netscape occupies an "interesting middle ground along the spectrum." This woman, Qiao Yubo, is only about 5 feet, 5 inches tall. At only five months pregnant, her 5 feet, 7 inch belly would be taller than she is. I'm just amazed at what the human body can do. I bet Qiao's belly skin is going to hang to her knees after she gives birth. Qiao Yubo, who is pregnant with at least five babies, walks with her husband, right, in Songyuan, in China's northeast Jilin province, Sunday, June 11, 2006. Qiao, who is 1.67-meters tall, has a waistline measurement of 1.75 meters, five months into her pregnancy. Qiao's excessive bulk is causing difficulties in getting around, with taxi drivers too afraid to take her in their cars. Her clothing is all custom-made and she eats up to seven meals a day. (AP Photo/EyePress)

Aaaargh! Gonna Get Ya! 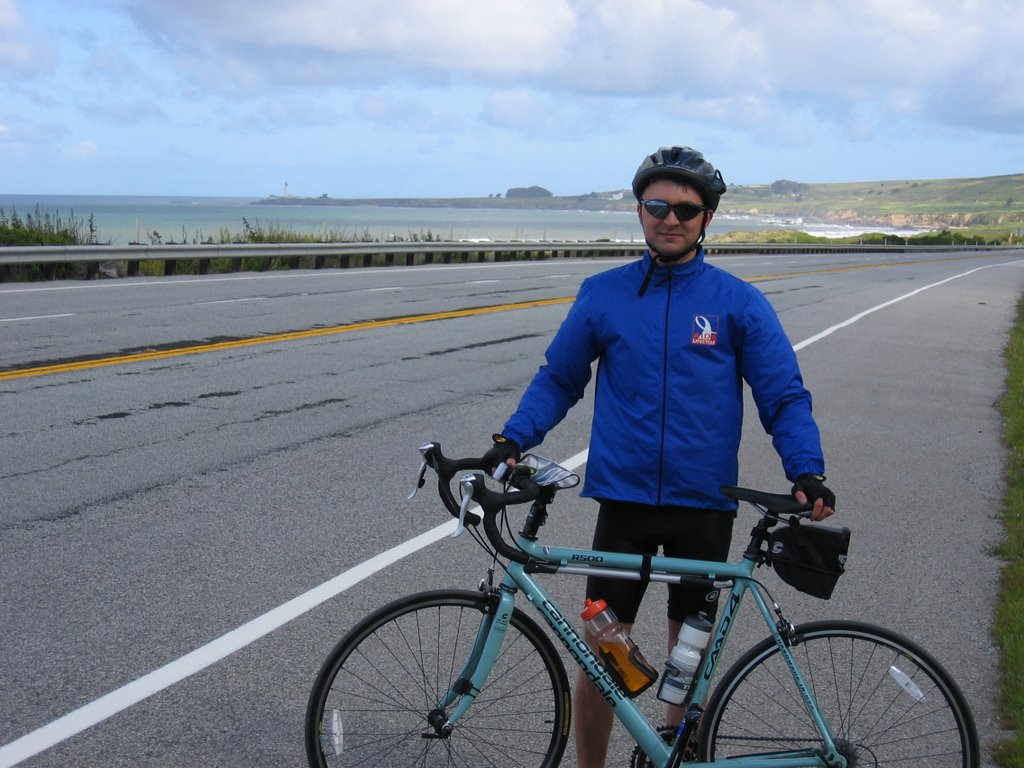 Today is the first day on my friend's, Erhan Erdem, bike ride from San Francisco to Los Angeles. He's been training since last September and now away he goes. I'm looking forward to tracking the experience.aidslifecycle.org blog over the next week to follow their adventures. Who knows, Erhan may even show up in the aidslifecycle Flickr photo gallery. His 1 goal.2 tires.7 days.585 miles blog is all about him, so there's no competing with other riders.

He's participating in the Experience AIDS/LifeCycle official cycling event of the San Francisco AIDS Foundation. Over the next week, they'll bike 585 miles through beautiful California. Even though the minimum to participate was $2500, Erhan raised more than twice that through friends and co-workers. I guess working at eBay, which matches funds for donations, doesn't hurt. Being a nice guy engineer at Netscape and AOL, where we both worked, pays off too.

I'm sure the Foundation is still taking donations if you want to help Erhan get to over $6000 in donations.

Watch out for any speeding fools and don't become roadkill!

Earlier today, I checked out the Art Deco and Modernism Show at The Concourse Exhibition Center, 8th and Brannan Street, in San Francisco. Fancy name for one of those buildings that looks like a converted animal auction warehouse. It was next to one of the few roundabouts in the downtown area. At least that I know of.

It was put on by the Art Deco Society which I assume is a social club that gives people excuses to dress like the 1920s and 30s out in public. The event was billed as the Largest Art Deco & Modernism Sale in the country.

There was lots of cool furniture and knick knacks, but of course I don't have the space or the money for all the eye candy. When I win the lottery, I'm going to decorate whole rooms in those style. ; ]

Since I couldn't really buy anything, my favorite part of the day was the Tango dance demonstration. I guess Tango was one of the latin dance fads that go through American culture every few years. The demo was put on by Dance Through Time, a troup that performs a variety of dance styles from 1500s European social dances through current club dances. The woman was the instructure and she told us something about the culture Tango came out of. The most interesting part was learning the symbolism behind some of the movements. Like those quick kicks you always see the ladies do, it's in reaction to movements of the male partner, not just randomly added to the dance. The same with some of the cross and weaving looking steps.